Welcome to the 2nd part of my blog series looking back on the best photos from my 2013 weddings and a little bit of story behind each one.

These photos were all shot either just before, during or after the wedding ceremony. My shooting style of wedding photography is definitely photo journalistic, perhaps better known as documentary style, capturing real moments and real natural expressions as they happen that really tell a story. There is no better time for this than the wedding ceremony. 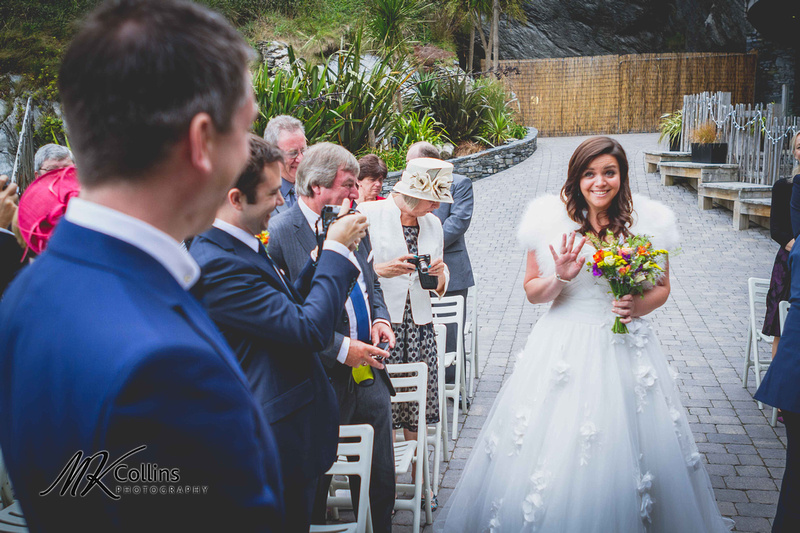 A lot of the true emotion of a wedding day shows itself during the wedding ceremony. Sometimes it's during the vows or maybe after the first kiss or sometimes like this photo at Tunnels Beaches, the first moment the bride and groom lay eyes on each other on the day of their wedding. Susan, the bride pictured here was quite tense as she walked down the tunnel to the ceremony area at Tunnels Beaches and I just love the expression on her face saying hi to fiancé Stewart. Her expression is one of joy, relief, nervousness and love! I like this photo so much, I put it on the front of my website slideshow. 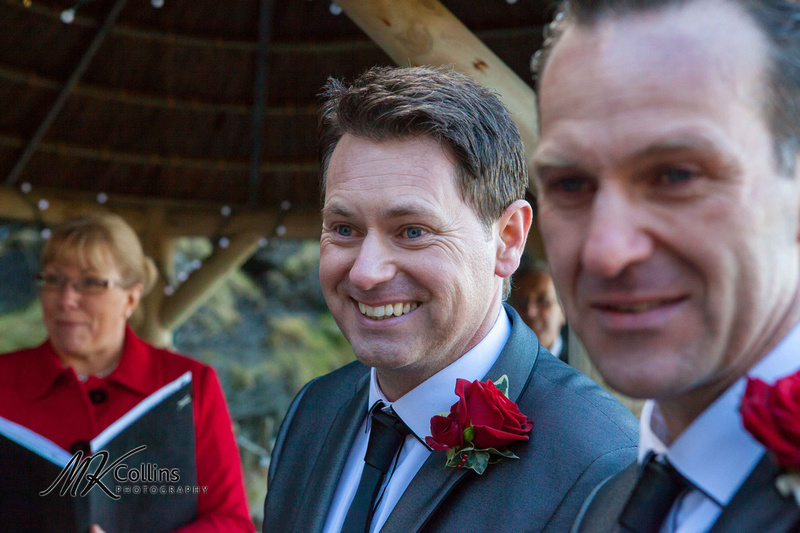 Back to Tunnels Beaches for this next photo, but to a different wedding. This is the groom Darren (on the left) and similar to the first photo, he has just seen his bride Nicola for the first time. Again, I love the expression and also the looks on his best man and the registrars faces too. Sometimes, it can be a bit of a juggling act when the bride makes her entrance as I am quickly looking at both the bride and groom for great expressions to shoot, all during a five to ten second timeframe!

This photo was taken literally after the ceremony had finished with the couple having just walked back down the aisle and straight out of the church and the look on Louise's face is one of pure joy to have married her man! These moments are important to catch as every one of their family and friends are still inside the church and would obviously not have seen this special moment. 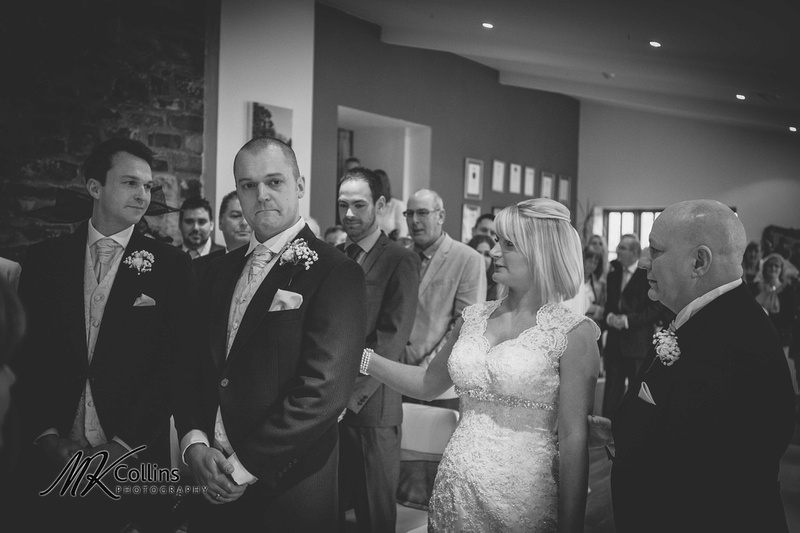 This photo definitely tells a story! The groom Dan was really trying to hold it together as he had just had his first glimpse of his bride Kirsty for the first time on their wedding day. The protective look on Kirsty's face is a picture too. A couple of seconds later I turned my camera towards the guests and captured a few tears from them as well, as it was clearly such a beautiful moment. 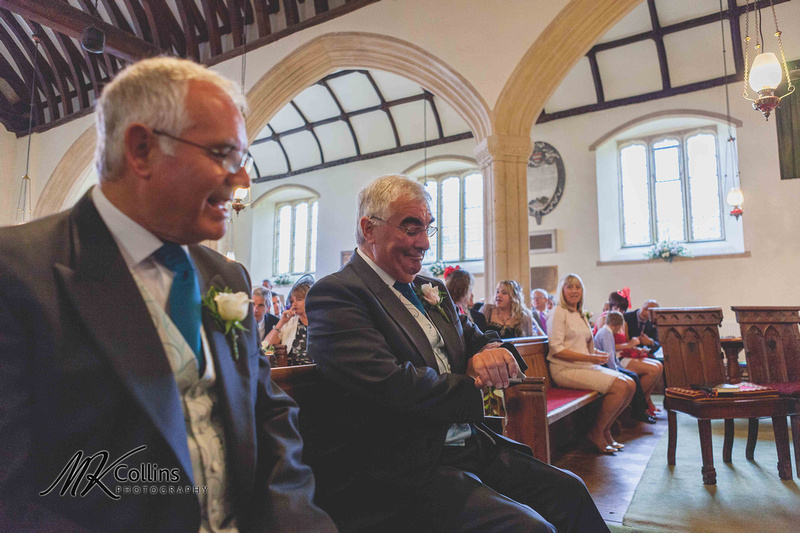 As you may know, it is quite normal and traditional for the bride to arrive late for the ceremony. I should know as my wife was almost 15 minutes late on our wedding day! For a groom this can be quite a nerve wracking time, not only because he hopes the bride will turn up at all, but its the anticipation that can be brutal and I'm talking from experience! This was a 1pm start and it was about 5 past one when I jokingly mentioned to the groom Mike 'what time was the ceremony supposed to start again?' Mike just laughed and gazed at his watch. Don't worry, his bride Maggie arrived five minutes later, much to Mike's relief!

As a wedding photographer, one of the toughest parts of the day can be shooting at the ceremony. Sometimes during the ceremony itself, I am restricted to where I can and cannot stand and sometimes I am rooted to one spot and cannot move at all. Problem is, I want to get as many great shots of the bride and groom as I can. One of the first things I do when I arrive at a venue is ask the priest or registrar how much or how little I can move around to get shots of the happy couple whilst the ceremony is taking place. Now, it's only good manners to ask and the last thing I want to do is get in the way of the ceremony, so I always obey my instructions. For Nicola and Ian's wedding at The Highbullen Country Hotel I found myself positioned to see Nicola's face, but as Ian was repeating his vows I couldn't move to get a shot of his face. As I didn't want to walk in front of them (that would just be plain rude wouldn't it?) I positioned myself to get a reflection of Ian in a nearby mirror. Phew... 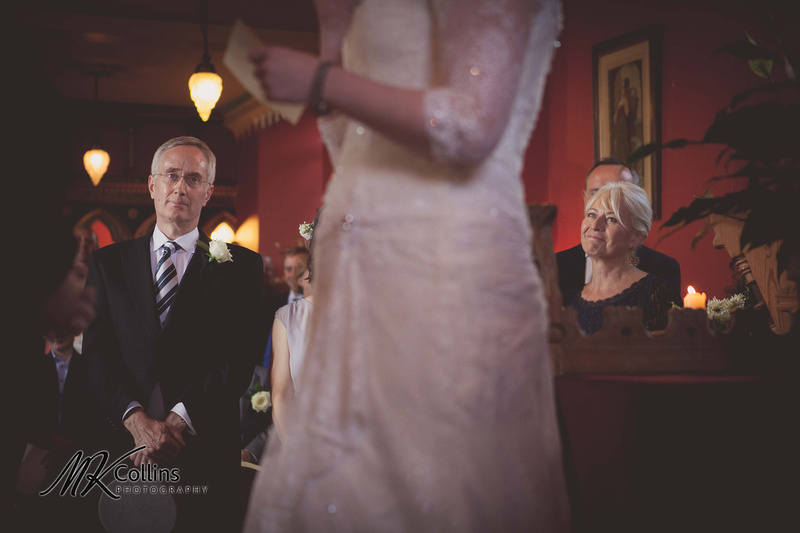 We mustn't forget the parents of the bride and groom at a wedding. The ceremony is quite an emotional time for them too. The mother and father of the bride Alys, pictured here, were clearly in the moment, gazing at their daughter as she repeats her vows. 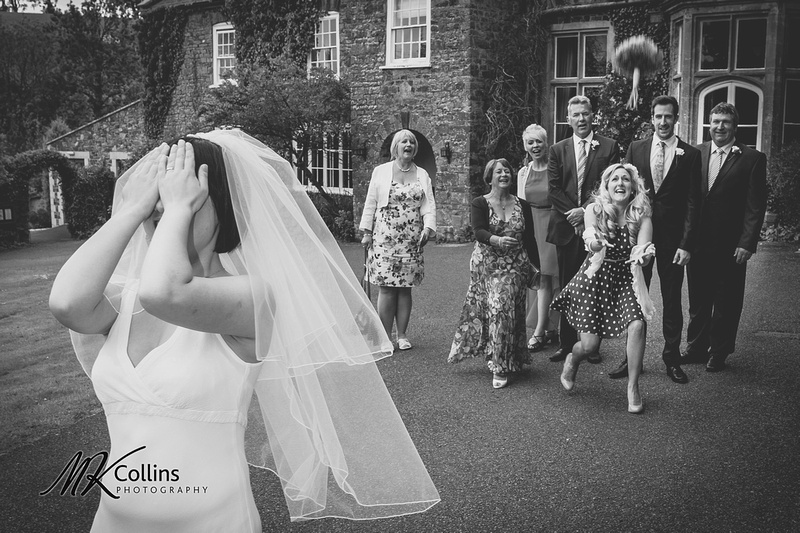 Finally, one of my favourite shots of the year at Northcote Manor back in June. Not just because it's a great moment with the bride's sister-in-law lunging to catch the bouquet, but because it was one of the only weddings I shot in 2013 where the bouquet was actually tossed at all! Is this becoming a forgotten tradition? Shame if it is, it makes a great photo!